By Sea, through Panama and by sea again
Winter storms made it difficult to travel over land and many chose to travel by sea. Between 1848 and 1849, seven hundred-sixty two ships left Eastern ports for San Francisco. This made San Francisco the third most important port in the nation after New York and Boston. The trip around Cape Horn was long though, so people sought out to find another route.

With gold on everyone’s mind, it didn’t take long to find a faster route to California. This route cut 8,000 miles and months of travel off the sea voyage around Cape Horn and seemed like a great option! This option could cost anywhere between $600 and $1,200. This route involved traveling mostly by sea to Panama, and then by land across the Isthmus of Panama. 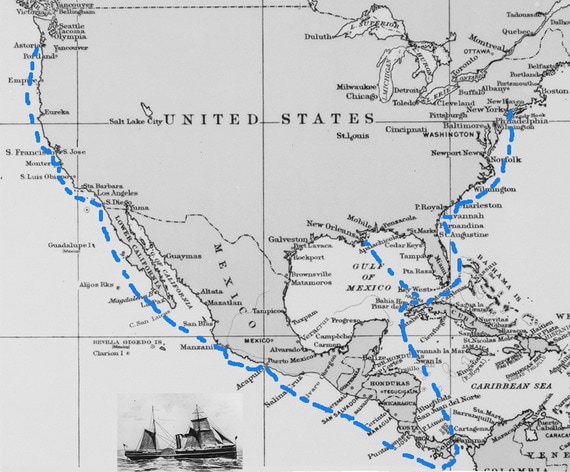 Let’s take a closer look....
The Dangers:
The Land Portion:
Once 49ers made it to the Isthmus of Panama, they had to cross it. It was 75 miles up the Chagres River, then 25 miles by mule to Panama City. Once they arrived in Panama City, many were confronted with a harsh reality: There were few ships to take them to California. Many were stuck in Panama City, for weeks, if not months.

Sickness:
Weary travelers had to face disease such as: Yellow fever,  Malaria, Dysentery and for those stranded in Panama City, Cholera.